For a local Heritage Day event, the sort that buildings are open to visitors to look around and explore, perhaps with a guide and with extra historical explanation, I decided that I would contribute to the local church’s one. Parts of it date back to Saxon times, but the bulk of it was  rebuilt around 1611, enlarged in Victorian times, and further enhanced  in early 2000’s. It is situated in a very pleasant churchyard with old graves and a few tombs, surrounded by meadows and fields. The grounds are carefully managed in a conservation way  with a good sprinkling of unusual and special native flowers and fauna. It sits just above the Hogsmill, a tributary of the Thames, it’s largest claim to fame is that it was the inspiration for “Ophelia” by Holman Hunt.

I had the idea that I would create a selection of dyed skeins of wool, showing the range of colours possible even within a small area. I decided that I would have three skeins of each, one as normally, and then the others modified, either with iron or with ammonia. These choices were historically correct, the iron “saddens” colours, making them greyer or darker, and the ammonia helps to make some colour brighter and changes other very dramatically but increasing the pH.Iron could have been introduced by dyeing in an iron pot, it takes very little to have an effect, and the ammonia could have been nothing more complicated than aged urine.

The iron  rinse was made by  keeping iron nails in a light vinegar solution for several months, cooking it up every so often, admittedly not  terribly scientific but it works, and the ammonia was simply a standard household cleaning product rather diluted.

There are lots of other modifiers around but I wanted to keep it fairly simple and reasonably possible for a simple basic dyer of  perhaps 500 years ago.

The first collection, but many more to go, these are mostly spring leaves, but the autumn leaves and twigs will be a little different 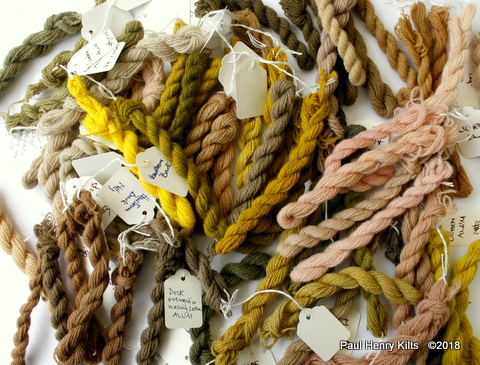