It seems to go with the job of a kiltmaker that they end up doing alterations, to be fair I don’t mind very much, but it’s seldom straightforward as you never really know what to expect once you start to open up the lining and look inside. Perhaps that challenge is exactly what makes me still do them, but I know some makers who will only adjust or alter their own kilts.
There isn’t a single way to make a kilt, and as they are usually expensive items many makers try and find short cuts. Some of these  seem reasonable, like a little extra machine sewing to save time over hand sewing, but I do draw the line at iron-on interfacing instead of pad stitched hair canvas. This, time heavy tailoring process,however is one of main shortcuts that one  of the largest commercial kilt maker uses. In fact they are the supplier to various British Army regiments, so it must work, although I suspect cost cutting is not only on the mind of those kiltmakers but also in the mind of the Quartermasters. A few years ago it was rumoured that all kilt making was going to be out sourced to the subcontinent, because of an economy drive that was stopped because of a public outcry, but I do wonder if the kilts would have looked  or been constructed any differently.

The most frequent alteration I am asked to do is so try and  make the kilt a little larger, in time most  gentlemen’s waists get a little bigger, and despite the kilt having an adjustment range of plus/minus 4″ it’s often not enough. Moving buckles and straps works for an an extra 2″ , but any more than that means that some extra  unpicking and sewing is needed. Most simple buckle moving can be completed within a few hours, so almost while you wait.

The kilt on the table at the moment is quite the reverse, it was sized at about  a 52″ waist and needs to be reduced to about a 44″, this is a rather major job. For the client the loss of weight is certainly a good thing, but for a kilt maker it adds may challenges. The main issue was that the front apron overlapped the pleats at the side by more than 6″ , catching on them and proving to be very annoying, and the fact that it just didn’t feel right.Obviously the  buckles and straps were in the wrong place as well, and the kilt was no longer centred. 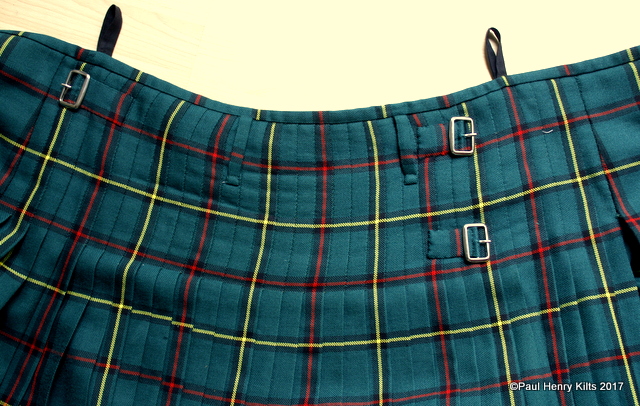 To solve the problem the kilt had to be largely disassembled and put back again with fewer pleats. The waistband was removed, 4 pleats on either side were unpicked and then the excess fabric cut out, and the newly exposed edges sewn back together again. Doing it this way meant I didn’t have to resew all the pleats, and as the inside of the pleats had been cut out already I couldn’t have just unpicked the whole thing successfully. 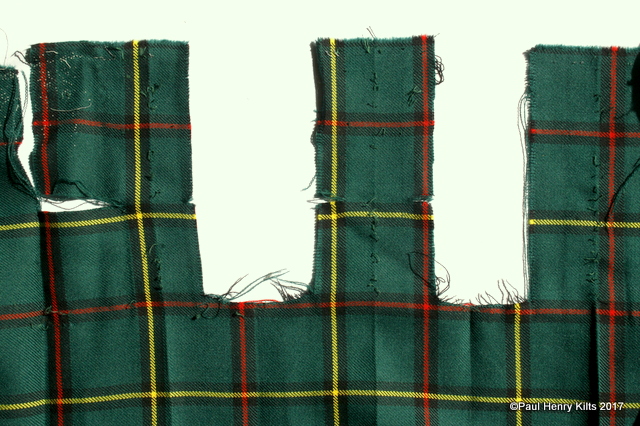 There was no original stabiliser and precious little canvas, so all new support materials were needed.

After that the aprons were reduced by a few inches as well so  a new fringe was created , I  added a triple instead of the existing double, then the waistband was sewn back on, and  original buckles   but new tabs and leather were sewn on in the new spots All  the kilt needed a very thorough steam press to remove the previous fold and crease lines, although some bits were pressed at several stages during the remaking.

There was a  lot of slightly crude stitching as well, for example on the bottom edge, 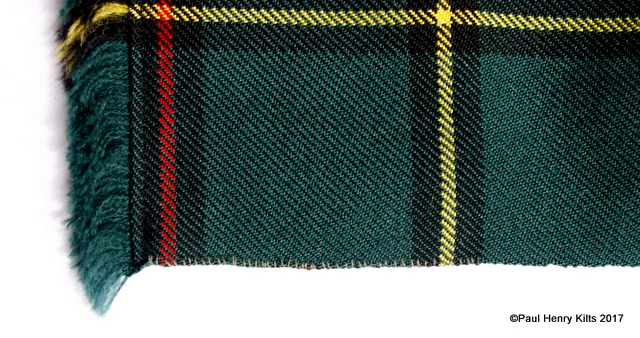 which I removed and replaced with something a little more subtle!

The lining was beyond   re-use, so I’ll get some more plain black cotton over the next few days, once that is done and a complete repress, hopefully it will be as good as new, and  once again in a fitting condition.

Altering a kilt is something that takes time and effort, depending on the changes needed costs do mount up, a simple buckle position change means that the kilt can be worn again and is given a whole new lease of life, major changes need to be more carefully considered, as the work gets close to  completely sewing a kilt from scratch, with the exception that sometimes the actual tartan was a special weave or difficult to get hold of so the decision is much easier to make.